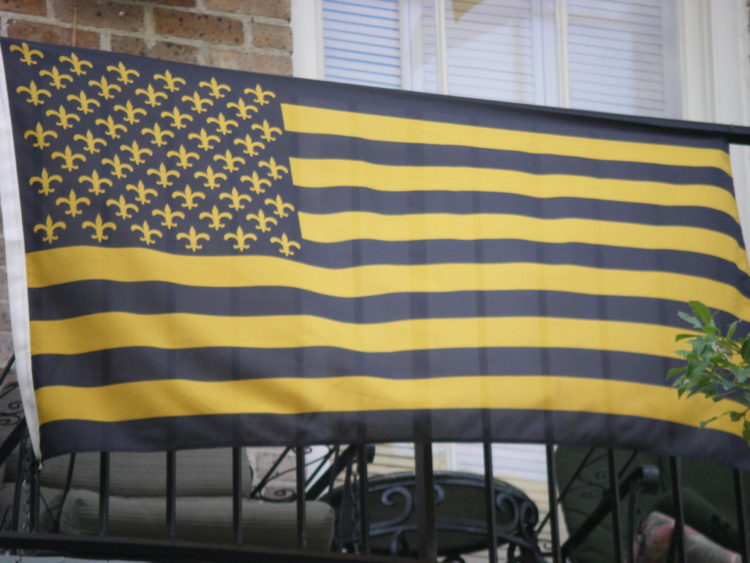 These 8 great sights of New Orleans represent many cool, fun, and happy things to see in Crescent City. New Orleans Louisiana is one of the great cities of USA and the world. With its melting pot of cultures, people, architecture, cuisine, and music, New Orleans will interest pretty much anyone.

Arriving by airplane, you will first see a Louis Armstrong statue and this gorgeous mural in the small New Orleans airport terminal. New Orleans is considered the birthplace of jazz and naming the airport after Louis Armstrong pays homage to one of Crescent City’s most famous citizens.

Getting Around New Orleans

One way to get around New Orleans is the efficient trolley. Notice that it is clean, empty (probably not on Mardi Gras!), and frequent (two oncoming cars).

New Orleans style is also prevalent. How about this for your next Christmas tree?

This is one of the three possible burial locations of Marie Laveau, the voodoo queen. The 3 x’s indicate someone has placed an offering and requested something (usually a love spell). The 3 x’s are circled when the request is granted.

This burial site is owned by Nicholas Cage, one of many celebrities, authors, and famous people who have an affinity for New Orleans Louisiana.

Throughout the French Quarter, porches are adorned with elaborate iron work and decorated with plants. On Mardi Gras, Sugar Bowl and Super Bowl, and other party dates, find the porches filled with beads—and partiers!

What are some of your favorite sights of New Orleans?

8 Great Sights of New Orleans was first published on McCool Travel in 2011.