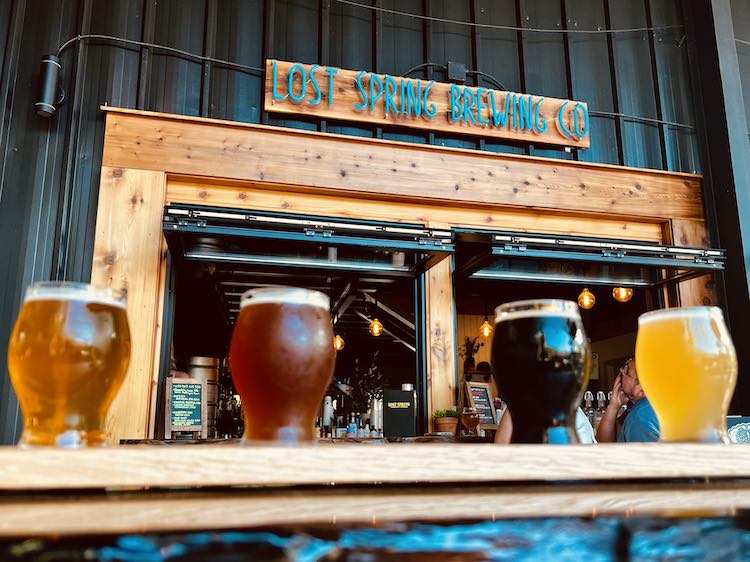 Here are all of the current and amazing US Gulf Coast craft breweries to visit in Coastal Mississippi. Check their websites or Facebook pages (included below) for current offerings as their menus frequently change.

Enjoy your liquid road trip explorations on the US Gulp Coast.

The Chandeleur Island Brewing owners, Cam and Cain, are natives of Gulfport and tinkered with home brewing for about 20 years before launching the business. The brewery particularly focuses on brewing sours and fruit brews, like Guava Jelly and Raspberry Ginger sour. Seasonal varieties like King Cake Ale and Satsuma Orange Sour are definitely worth a try.

US Gulf Coast Travel tip: Join a Chandeleur Island Brewing tour (Sat noon and 2pm) for a behind the scenes look at the operation and facility plus spend quality time with the Katie (the head brewer) and other staff and Coastal Mississippi craft beer aficionados.

With up to 24 taps of their own creative Coastal Mississippi craft beer (and perhaps some guest brews), Craft Advisory Brewing and Bistro will keep every craft beer lover interested. Besides the two dozen craft beers, they offer tacos, burgers, brats, pretzels, and more food.

The Pineapple Habanero Stout was a favorite on my last visit to Craft Advisory but also be sure to try one of their flagship brews—Ocean Springs-ling, Hoppy McHop Face, East Beach Lager, Yep! Irish Stout, and Pelagic Sour (featuring your choice of fruit mix-in).

The Fly Llama founder helped open Chandeleur Island Brewing—and worked at several other craft breweries—and this is his first venture. David Reese is an Advanced Cicerone, the only certified one in Mississippi and one of less than 150 in the world. Shall we just drop the mic and proclaim that Fly Llama has the best craft beer in Mississippi?

With 18 craft beer and seltzers on tap, Fly Llama visitors will find plenty of options to satisfy their thirst and cravings.

Now occupying the same building as former Biloxi Brewing, Fly Llama Brewing will remain on the scene for many years (trust me!). I love their fantastic beer names, logged merchandise, and fun artwork. Explore the space while you are there.

See also 30 Fun Things to Do in Biloxi Mississippi

Hops and Growlers captured my heart on my first visit when I tried their grit flavored craft beer. They have 20 craft brews on tap, running the gamut from sours and wheats to stouts. US Gulf Coast Travel tip: If the triple chocolate imperial stout is on tap, try it!

Lazy Magnolia Brewery is Mississippi’s oldest craft brewery and the only one on this list north of I-10. But it is worth a visit, whether as a short day trip from Coastal Mississippi or as a quick stop while driving between New Orleans and Mobile. Their flagship Southern Pecan beer is unique, flavorful, and a favorite Gulf Coast beer.

But popular and amazing craft beer is not all that Lazy Magnolia does well. Visit The Porch for magnificent brick oven pizzas; the dough is made from rainwater collected onsite. In fact, Lazy Mag collects 14,000 gallons of rainwater every week and were the first permitted bottler of Mississippi rainwater. Pretty cool.

US Gulf Coast Travel tip: Combine the Southern Pecan brew with their Sweet Potato brew for a Gulf Coast Black and Tan. It is delicious.

Love the cozy little space of Lost Spring Brewing and Community Taproom, located right behind Mosaic and surrounded by plenty of free public parking spots. Oh, and their craft beer is pretty good too. Most of the eight taps are available in 10 ounce and pint pours; some higher ABV brews are only served in 10 ounce glasses.

Two small Coastal Mississippi craft beer producers without their own craft brewery (as of publication date, but they might soon!) are:

Please let us know of any other Coastal Mississippi craft beer producers or craft breweries, so that this list can be comprehensive.