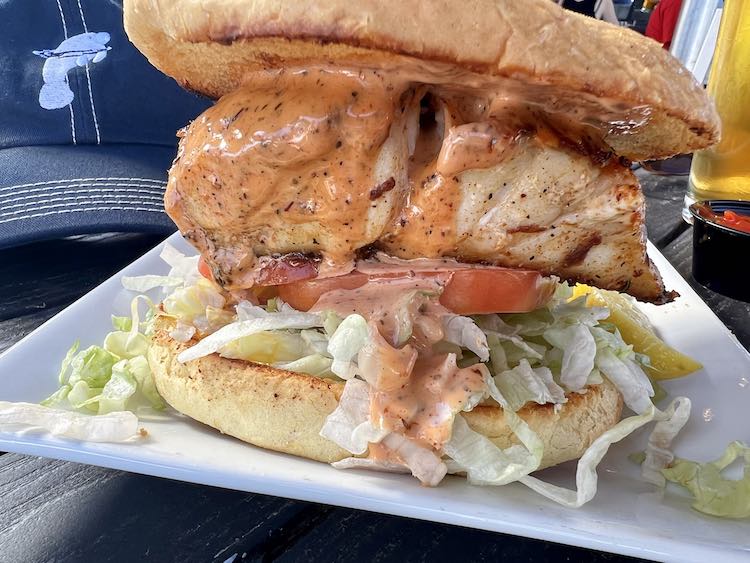 While the fish sandwich was not invented on the US Gulf Coast, is there anything more Gulf Coast than a grouper sandwich? Not to us! We even created an entire blackened grouper sandwich trail. See our 13 Best Grouper Sandwiches in Florida

But grouper sandwiches are the newest kid on the scene, at least in terms of iconic Gulf Coast sandwiches.

Grouper started its climb into Gulf Coast popularity in the 1970s, when king fish and pompano became too pricy. Now, grouper is the most popular US Gulf Coast fish and is readily and freshly available from Key West to South Padre.

There are several different varieties of grouper—red grouper is considered the tastiest but you may also find black grouper, yellowedge grouper, or scamp grouper being served, offered, or sold at your favorite restaurant or seafood market.

The common accepted story is of the modern Cuban sandwich’s invention in Tampa, Florida in 1896—combining the existing Spanish ham and cheese on Cuban bread (a version around since the 1500s in Cuba) with Genoa salami, because Tampa cigar factories were mostly populated by Cuban and Sicilian/Italian immigrants.

But in Miami, they claim to have remained true to the authentic Cuban sandwich from the homeland. The first Cuban sandwich in Miami can be traced to 1947. Their classic Cuban sandwich features ham, pork, Swiss cheese, pickles, yellow mustard, and butter, on Cuban bread, and pressed to heat in a La Plancha griddle.

In fact, both versions, in their authentic forms, are made on Cuban bread and pressed on the griddle. There is a great Cuban sandwich rivalry between Miami and Tampa and we encourage you to try them both and decide, even if like us, you decide both are amazing.

Around 1900, New Orleans was chock full of Sicilian immigrants and one food from home they loved was muffoletta bread. Lupo Salvatore, around 1906, made a deal with a popular muffoletta baker and provider to allow his Central Grocery to sell directly to the Sicilian workers.

The Sicilian workers before had bought a muffoletta loaf from the baker then stopped at Central Grocery to buy meats and cheeses and olive salad, then took all that to work for the midday lunch. Sicilian tradition was to eat the items separately but Salvatore created the muffuletta (accidental misspelling) sandwich in 1906 by filling the muffuletta loaf with the olive salad, meats, and cheeses, wrapping it in paper. Workers found it easier to carry and handle and Central Grocery’s Muffuletta sandwich became an iconic Gulf Coast sandwich.

On your next New Orleans visit, order the classic muffuletta sandwich at Central Grocery, which looks nearly the same now as in 1906. Stroll across the street and pick a spot along the Mississippi River and think about the thousands of Sicilian immigrants who fled the poverty conditions in Sicily to build new lives along the US Gulf Coast.

The name Po’ Boy originated in 1929 when the Martin Brothers Coffee Stand offered a free sandwich to striking streetcar railway workers. When the Martin brothers saw a union worker enter their place, they yelled, “here comes another poor boy.”

Even though the name Po’ Boy can be traced to 1929, this type of hot, the seafood sandwich on a French baguette was definitely around well before then in the form of an oyster sandwich or oyster loaf.

The classic Po’ Boy contains oysters or shrimp but just about any sandwich filling will work and has been tried. We have seen gator, crawfish, grouper, and much more. One New Orleans restaurant sells 50 different Po’ Boys. Po’ Boys can be found on restaurant menus all over New Orleans, along the Mississippi coast, and even around the US (but the Gulf Coast does it best!).

One of our favorite Po’ Boys is from Bozo’s Grocery in Pascagoula. There is always a line a lunch time and the order taker can be surly, no nonsense, but in the most charming way (I suggest you not ask any silly questions). Place your order (I suggest 1/2 oyster, 1/2 shrimp) and explore the market and do a little people watching while waiting for your Po’ Boy.

Some popular places in New Orleans for Po’ Boys include Mother’s Restaurant, Johnny’s Po’ Boys, Parkway Bakery, and Casamiento’s (a celeb hot spot). If you are visiting New Orleans in November, look for the Po’ Boy Festival.

US Gulf Coast Travel note: While we prefer the spelling Po’ Boy, it is common to also see Po Boy, Po-Boy, or other derivations.

Other Iconic US Gulf Coast Sandwiches

Look for crawfish rolls (or crawfish and shrimp rolls) during the season throughout Louisiana and southeast Texas. Just one example is the VooDoo Crawfish Rolls at New Orleans Food and Spirits in Covington. Louisiana.

While Bahn Mi sandwiches are certainly not native to the US Gulf Coast, there are many places in and around New Orleans that have created their own versions of the classic Vietnamese po’ boy-like sandwich. One place that makes a killer Gulf Coast Bahn Mi is Le Bakery Cafe in Biloxi. Try their magnificent coconut curry chicken or other versions on incredible French bread.