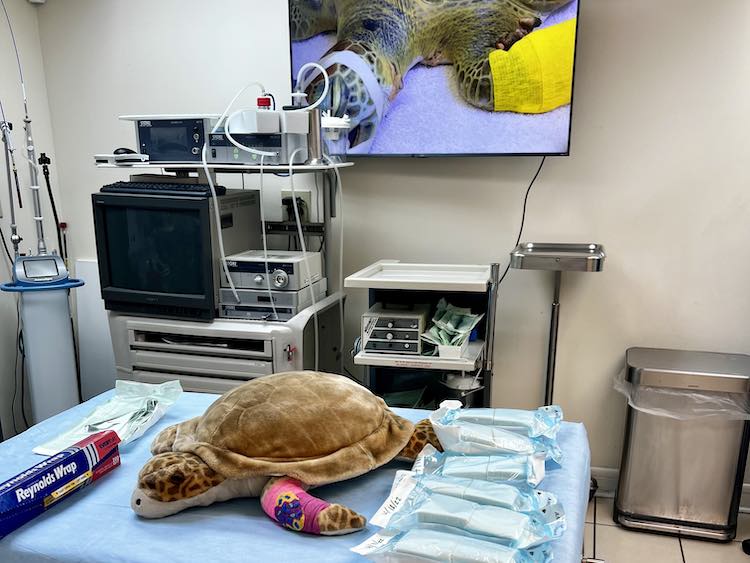 Find The Turtle Hospital at 2396 Overseas Highway in Marathon Florida—about 3.5 miles after the Marathon airport and 1.5 miles from the Seven Mile Bridge. The facility is near mile marker 48.5 (MM 48.5)—48.5 miles from Key West and 60 miles from Key Largo.

The Turtle Hospital is open to visitors every day from 9am-6pm, with official tours every 30 minutes starting at 9am. The last tour begins at 4pm.

Each tour—officially called a Guided Educational Program—lasts about 90 minutes and reservations are strongly encouraged. Even during non-peak periods of the year, tours might be fully booked with school field trips or other groups.

Once you make a booking, plan to arrive 15 minutes prior and then allow at least 15 minutes afterward to explore the education center, gift shop, and for photo opps.

The tour itself outlines operations at The Turtle Hospital, allows a peak into its facilities, gives guests chances to see rescued and rehabbing turtles, see hatchlings, and even feed sea turtles.

US Gulf Coast Travel tip: the education center is free to visit and is a worthwhile stop if you do not have time for the full experience.

Five species of sea turtles are found in the waters around Florida.

Leatherbacks are commonly rescued and admitted after ingesting balloons which look like jellyfish. They love eating jellyfish but unfortunately mylar and plastic balloons are very dangerous to leatherbacks.

Injured and sick sea turtles found in the Florida Keys and South Florida waters are brought to The Turtle Hospital. See below for a list of other sea turtle families around the US Gulf Coast.

The Turtle Hospital ambulance transports about 100 rescued sea turtles a year but others might arrive in various ways. Kind boaters and fishers are known to drop off injured or sick sea turtles here or call in reports so they can be rescued.

Sometimes, lost sea turtles need assistance. An example last winter was when a bunch of Kemp’s Ridleys were trapped in Cape Cod waters and needed help to get back to the warm waters. 20 volunteer pilots donated time, fuel, and aircraft to fly lost turtles from the north.

Most of the rescued sea turtles stay here 9-12 months to rehab before release. TJ Sharp, pictured above, was released into the Gulf waters three days after I visited The Turtle Hospital.

Rehab methods at The Turtle Hospital vary according to the reason why the sea turtle needed to be rescued.

The above mentioned cold shock sea turtles spent minimal time at The Turtle Hospital before being fully ready to return to the warm water around the Florida Keys.

Some sea turtles require surgery to remove debris from their stomachs or other body parts. Fishing line might be wrapped around their flippers or a hook caught in their eye. Some issues are treated with non-surgical methods, like laxatives to clear their digestive tracts.

Over 75% of sea turtles rescued by The Turtle Hospital are eventually released.

One of the many volunteers at The Turtle Hospital will lead your Guided Educational Program. Remember, it will last 90 minutes. You will be outside some of the time, so bring a hat, sunglasses, sunscreen (reef safe, please!), and water.

The guide’s presentation is entertaining but also very informative. You will hear the history and information of The Turtle Hospital. Make sure to ask any questions.

Later on your Guided Educational Program tour, you will see dozens of rescued sea turtles in tanks, including some Bubble Butt permanent residents. You will learn what the Bubble Butt means.

Depending on the time of the year you visit, you will see hatchlings in various stages. You will also have the chance to feed sea turtles in the large pool.

All in all, the Guided Educational Program at The Turtle Hospital is so much fun and, yes, educational. It makes a big impression on children and adults alike.

US Gulf Coast note: the visitor center and hospital building was formerly a strip club. Crazy but true!

What Else Can You Do to Help Sea Turtles?

First of all, if you ever see an injured or sick sea turtle, do not attempt to assist it. They are endangered and legal repercussions are severe.

Prevention is always the best path and steps The Turtle Hospital suggests include:

Other ways to support The Turtle Hospital:

You might see sea turtles on a Lazy Dog Adventures Eco-Tour in Key West.

See our articles about the closest beach to The Turtle Hospital: 8 Great Reasons Sombrero Beach is Florida Keys Best Beach and other 8 Great Spots to Visit in the Florida Keys.

Have you been to The Turtle Hospital in Marathon Florida Keys?