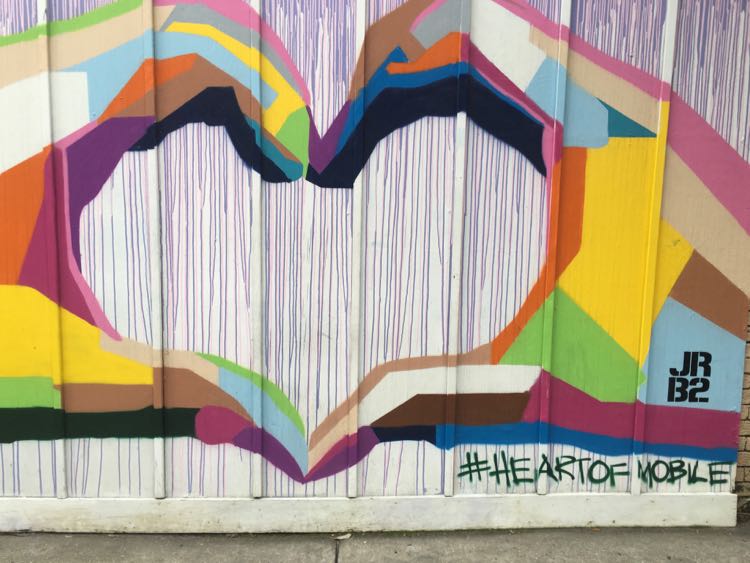 Our list of fun things to do in Mobile Alabama include cool museums, fun outdoor adventures, Southern history, amazing restaurants, and much more. 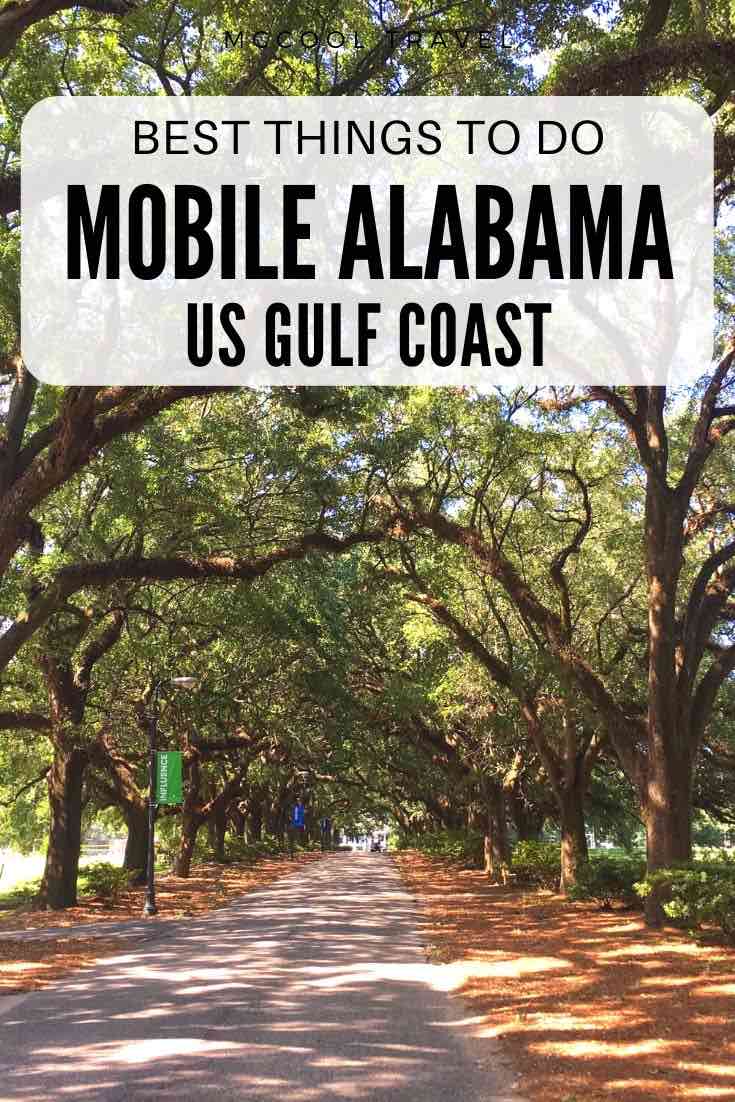 Thank you to Visit Mobile Alabama for hosting us—our content is crafted so our audience can make informed decisions on future trips.

Mobile Alabama is the largest US Gulf Coast city between New Orleans and St Petersburg, Florida. In the year 1702, Mobile served as the first capital of France’s New World colony, La Louisiane. Today, Mobile is the capital of the area called LA (Lower Alabama) by residents and locals and the gateway to the exciting Eastern Shore and Alabama Beaches.

Getting to Mobile Alabama. Mobile AL is located along interstate highway I-10 about a two-hour drive from New Orleans and 3 1/2 hours from Tallahassee Florida. Drivers from Atlanta can reach Mobile in about five hours on interstate highways I-85 and I-65.

Many popular Carnival cruises to the Caribbean depart from Mobile harbor on Carnival Fantasy.

Fun Things to Do in Mobile Alabama

USS Alabama and USS Drum are two of the four National Historic Landmarks in Mobile Alabama. See other two below (in our ‘things to do in Mobile future visits” section).

In 1964 children from Mobile schools raised $100,000 in nickels and pennies to save the USS Alabama from a salvage yard in Bremerton, Washington. It was then towed here, at the end traversing a three mile dredged channel. USS Alabama Battleship Memorial Park houses USS Alabama, USS Drum, and dozens of historic military aircraft.

Choose from three self guided tours of the floating city. Learn about the ice cream shop, chapel, baseball team (Hall of Famer Bob Feller played on it), orchestra, and the 2,500 people who worked aboard. USS Alabama earned nine battlestars and its big guns were accurate to 21 miles. No USS Alabama crew members were lost in battles.

USS Alabama is transitioning into a WW2 museum and 36 rooms will have sound effects. Visit the fascinating diver exhibit which opened this past October. Re-enactments occur five times a year, with vintage planes flying overhead and propane powered guns battling them. Visiting then would be a fun thing to do in Mobile with children.

Near USS Alabama, the USS Drum is the oldest US submarine on public display. It sank 15 enemy battleships and earned 12 battlestars.

2. Where to Stay in Mobile AL

When planning your visit, consider our favorite Mobile Alabama hotels.

The Admiral Hotel Mobile is the first Curio property in the state of Alabama. On hot days, refresh yourself in the outdoor pool or at the Corner Bar.

Watch this video for a room tour at The Admiral Hotel Mobile.

Battle House Renaissance is a four star, restored historic hotel, and is close to the Mobile Convention Center. The Battle House is a member of the Historic Hotels of America, has Mobile’s only four star restaurant, and you must experience the whispering arches.

Watch this video of my suite at Battle House.

Another unique event that the Grand Hotel celebrates is known as a Jubilee—which only occurs here and in Japan. Jubilees occur only when conditions are right—on warm summer nights, often in pre-dawn hours, with a full moon—they take on the aspect of a joyous community beach party, adding yet another reason why this corner of Alabama is treasured as a one-of-a-kind destination.

Really adventurous and intrepid explorers should look into the Tensaw Delta platforms. See information below.

The GulfQuest National Maritime Museum represents all of the Gulf of Mexico. Before entering GulfQuest, look at the building from the parking lot. The lot was flooded by Katrina and is 8’ above the river level. The first floor is 16’ above water and the building is designed to look like a ship—with bow and bridge, stairwells are life boats, cafe is called Galley, and gift shop is Treasures.

Inside GulfQuest, learn about the Gulf of Mexico’s people, history, geography, and more. Pay attention to the maritime sayings on the hand rails when walking up or down levels and be surprised by the dozens of everyday terms with origins from the sea.

Definitely make time to steer your own cargo ship on the top level. Other games, activities, and displays sprinkled throughout the building will inform and entertain you. Learn how containers changed the world’s history. Containerization started here in Mobile and when Malcolm McLean invented the container cargo ship. See our GulfQuest containerization photo.

Did you know that the first Mardi Gras in USA was in Mobile Alabama in 1830?

The Mobile Carnival Museum offers three guided tours a day plus a self guided tour any time. They also own the second largest animal folk piece in world, valued at $2 million.

Visit the History Museum of Mobile for a fascinating journey through all historic eras of Mobile up to the present. Permanent exhibits detail history of Native American artifacts through Old Mobile, Confederate Naval History, Civil Rights, and current history in the making. Temporary exhibits change every few months.

Exploring the 250,000 acre Tensaw Delta on a kayak tour with WildNative Tours is one of our favorite things to do in Mobile Alabama. On one morning liquid road trip paddle I learned that Alabama has more navigable waterways than any state, that Tensaw Delta is the 2nd (or 3rd) largest delta in the USA, and that the blooming of Choctaw lilies marks the start of spring.

Stay in one of the dozen primitive camping platforms for a real special experience. Visit the Alabama Delta Resource Center and say hello to Wahlberg the resident owl. WildNative also offers boat tours from downtown Mobile.

Operated and owned by National Society of Colonial Dames of Alabama (Mobile chapter), the Conde-Charlotte Museum displays Mobile’s history under five separate flags. The building served as Mobile’s original jail (until 1848) and as a private residence since Jonathan and Elizabeth Kirkbride bought the place in 1850.

The Conde-Charlotte Museum rooms are arranged according to the timeline of occupation. French arrived in 1702 to settle the area. In 1763, the British came and named the fort after King George’s wife, Charlotte. When the Spanish arrived in 1780, they set up a water system.

9. Fun Things to Do in Mobile Alabama: Walking Tours

On this tour, we enjoyed Mobile’s best gumbo at The Royal Scam, Laotian/Southern/seafood fusion at Von’s Bistro (now closed), two items on Alabama’s 100 Dishes to Eat Before You Die (praline at Three Georges and crawfish/spinach dip at Heroes Sports Bar), amazing BBQ at Moe’s (but also get their killer Bushwhacker), and the remarkable oysters at Wintzell’s.

In between bites, our guide Meghan provided interesting and entertaining Mobile trivia and history. I miss those oysters!

Avenue of the Oaks at Spring Hill College

OK, this is not a formal walking tour nor is it in downtown Mobile but, my goodness, you have to experience the Avenue of the Oaks at Spring Hill College.

I last visited a couple of weeks after graduation—during which, I am told, the sight is even more spectacular (with magnolias is full bloom). So, even though I do not currently know any students there, I definitely gotta return for graduation week to see the magnolias!

This is one of our favorite US Gulf Coast Photo Locations For Fun Instagrammable Shots.

The Church Street Cemetery (aka Church Street Graveyard) opened in 1819 outside then Mobile downtown but now is surrounded by churches, public library, and other commercial buildings. Among the historic people buried here are Joe Cain, considered the founder of USA’s Mardi Gras phenomenon.

10. The Fort of Colonial Mobile

In 1702, the first fort was built 27 miles away at—the conveniently named—27 Mile Bluff. A second fort was built on the current Mobile site in 1723 while the current fort is a 1/3 size re-creation built in 1976 to celebrate the USA bicentennial. Walk through the history of the Fort of Colonial Mobile and experience 18th century lifestyle in Mobile.

11. Cathedral Basilica of the Immaculate Conception

In 1703, the first Catholic parish anywhere on the US Gulf Coast was established in Mobile. Bishop Michael Portier—the first Catholic Bishop of Mobile as of 1829—envisioned this grand and majestic cathedral. Construction of the Cathedral Basilica of the Immaculate Conception in Mobile began in 1835 and building was dedicated in 1850 by Bishop Portier (he died in 1859).

On Cathedral Square, in front of the building, Satchel Paige was flinging oyster shells and was first “discovered” and signed to a baseball contract.

See our Cathedral Basilica of the Immaculate Conception photos.

The house where Hank Aaron grew up moved to its current location next to the minor league stadium. Visitors will find mementos of his childhood and playing days inside. The Hank Aaron Childhood Home and Museum is a great pilgrimage stop for baseball and civil rights fans.

14. Places to Eat in Mobile Alabama

15. Other Places to Visit in Mobile Alabama

On future trips, I will explore some of the following Mobile Alabama attractions and discover even more funness.

Other places on my things to do in Mobile AL wish list include:

When planning your Alabama vacation, see also these travel articles:

Mobile Alabama is a favorite stop between Coastal Mississippi and the Florida Panhandle Beaches. 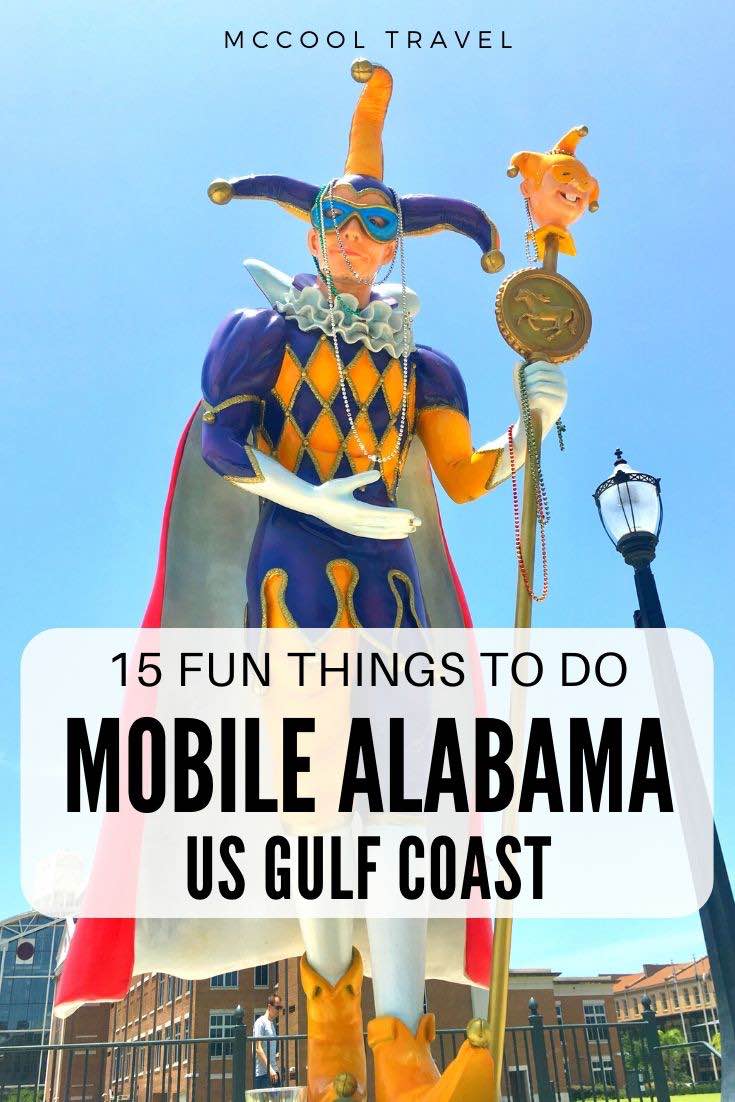