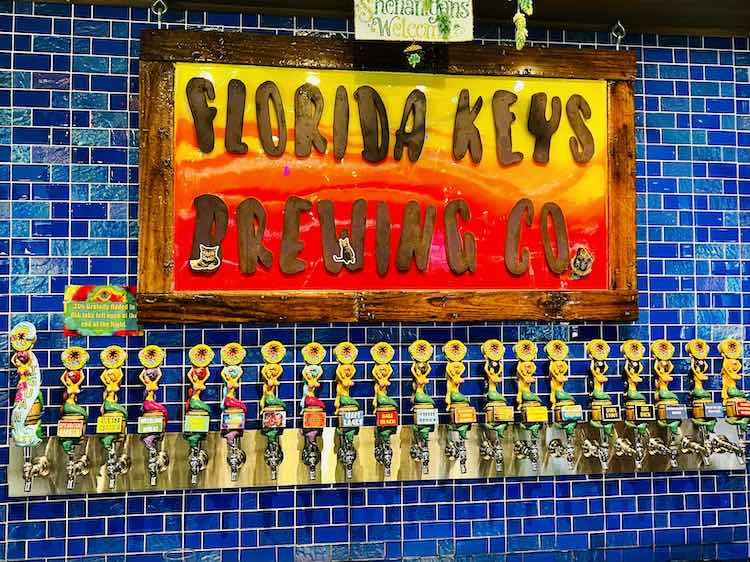 What beers are on tap at Florida Keys Brewing Company?

Iguana Bait is the most popular beer at Florida Keys Brewing Company. Iguana Bait is a Kölsch infused with an intoxicating blend of honey and hibiscus. It is absolutely perfect for those hot tropical days in the Florida Keys.

This is a good time to mention that Florida Keys Brewing Company uses no extracts. Passionfruit, tamarind, mango, pineapple, etc., comes from nearby Homestead. Lyon Farms in Homestead, for instance, is their source for mangoes.

Where Florida Keys Brewing Co. gets the honey for Iguana Bait varies; they order as much as they can get from sources in the Florida Keys and Homestead.

What is the most popular Florida Keys Brewing Company beer other than Iguana Bait? Cheryl told me those would be Spearfish Amber, Runaground Brown (first beer they ever made), and Smelly Butt IPA. During my last visit, I enjoyed the specialty brew with toasted coconut added to the classic Run Aground Brown.

Your first exposure to the Florida Keys Brewing Company experience will probably be in their fun tasting room. The tasting room is brightly decorated with tropical and tie dye patterns, designs, photos, and more. Take a seat at the bar, one of the nearby tables, or grab your order and head to the beer garden.

Florida Keys Brewing Company is one of the most cool and fun US craft breweries and you cannot help being happy here. Smile, Mon, you are in paradise.

Craft beer sample flights are served on brightly decorated flight boards; which are for sale (I have one and it is one of my favorite #USGulfCoast souvenirs).

If the tasting room is too packed, head to the outstanding outdoor tropical garden space. There are tables of various sizes to accommodate groups of all numbers. Bring a friend or several, enjoy the cool vibes, pat the guard kitty (Purr Monster has her own Instagram account), and get some suggestions and tips for the remainder of your Florida Keys vacation from friendly locals and visitors.

One of the tropical decorations onsite is this direction sign post, featuring some of the owners’ favorite craft breweries. Are any of your favorites listed?

On the third Thursday of every month, Morada Way Arts & Cultural District’s Art Walk closes the surrounding streets from 6-9pm. Be inspired by (and support) local musicians, artists, chefs, and small business owners.

Do you have a favorite Florida Keys Brewing Co. staff member? Here are the FKBC staff bios.

While every day is a reason to celebrate at Florida Keys Brewing Company, there are three major annual festivals. Plan your visits accordingly.

The major events and other initiatives throughout the year generate a lot of attention and money. Craig and Cheryl and the FKBC family do a ton of sponsorships and donations. Cheryl told me that they are “all about Seas or Fleas”—supporting organizations focused on the ocean and gulf waters and groups loyal to cats, dogs, etc.

One of Cheryl’s favorite sponsorships is with MOTE Marine Laboratory and Aquarium (in Sarasota) to help protect ocean reefs. FKBC is one of 15 Florida craft breweries participating in MOTE Lab’s Sharktoberfest on October 1. And they will also donate $2 from select six packs sold and $1 from drafts to MOTE.

Check the online calendar for other events such as Happy Hour, brewery tours, and musical artists (live music is hosted every night).

Tacos Jalisco operates a vibrant and popular food truck in Key Largo and here at FKBC is their second food truck. Amazing tacos and burritos! Tacos Jalisco is open 11am-8:30pm every day except Sunday.

If you cannot get down to Islamorada, Florida Keys Brewing Company distributes cans and kegs up to Fort Pierce. Look for them in restaurants, Total Wine, and select grocery stores (check Publix locations around Fort Lauderdale up the Treasure Coast). Check here for a listing of places to find FKBC kegs and cans in stores, restaurants, and more.

You can stay in a vacation rental apartment on top of the tasting room. How amazing is that? Learn more about the beer and bed two-bedroom apartment here. I booked a week there and cannot wait to check it out!